How to Talk to Your Parents About Senior Living Communities 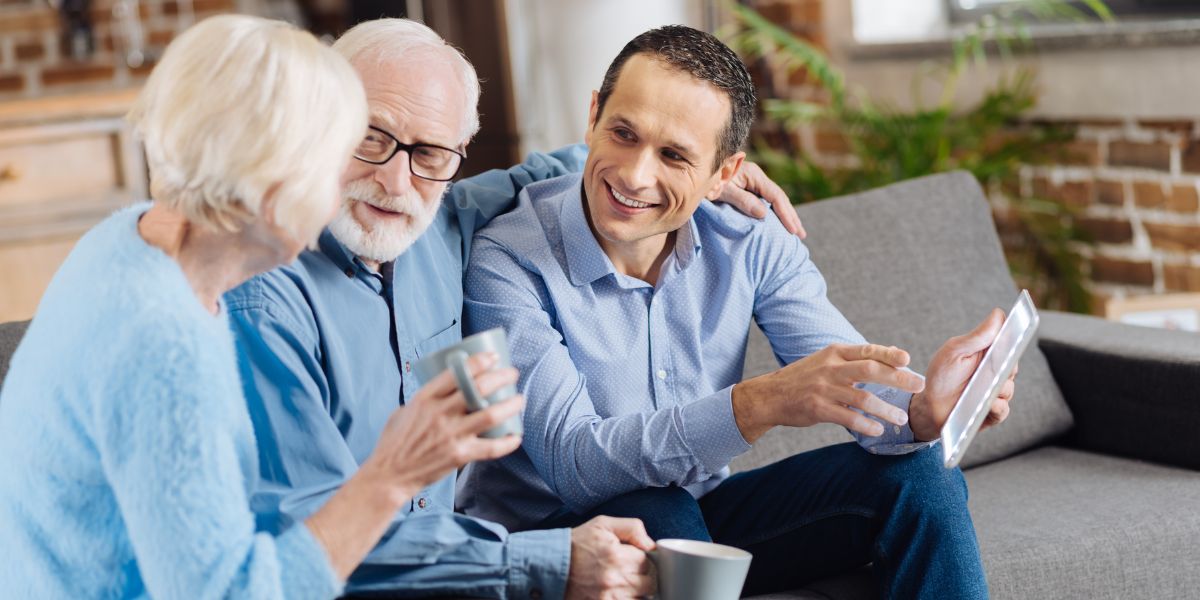 It’s probably one of the most intimidating conversations you can have with a family member—and we’re not talking about having “the talk” with your kids. No, we’re talking about broaching the conversation about senior living communities with your parents.

It Doesn’t Have to be a Difficult Conversation

If you’re dreading having this conversation with your parents, you’re not alone. Many adults with aging parents find themselves stuck in a similarly hard place: they see their parents beginning to age, and they may even begin to find themselves in an increasingly prominent caregiver position.

However, it’s difficult to broach the conversation because you long to provide your parents with the dignity, respect, and personal care that they always gave you. You don’t want to risk upsetting them or removing the last traces of independence they can still claim.

And yet, you also struggle with those increasing care responsibilities, or the worry you carry about your parent living alone in his or her house without easy access to care in case of an emergency.

The good news is that there are many, many children of aging parents who’ve gone before you.

It is possible to have a successful conversation with your parents about senior living communities. Even better? A staggering percentage of children and parents report improved relationships with one another after the parent moves to such a community.

Big decisions and hard conversations are almost never successful when done under stress. If you wait until your parent is in an emergency living situation, the conversation will undoubtedly be filled with tension, and your parent will most likely feel their autonomy slip away from them.
Instead, start the conversation as early as possible. And keep it to “just a conversation.” This protects your conversation from outside stress factors, and gives it the best chance of being as tension-free as possible.

Additionally, starting the conversation early will allow your parent to slowly begin to get used to the idea and take in your perspective. More importantly, this will give you time to hear what your parent thinks about the idea, and will allow you to respond in a way that allows them to make the decision on their terms as much as possible and thus maintain their autonomy for as long as possible.

2. Think about what you’ll say ahead of time.


It’s probably best not to wing the initial conversation, especially if you have a parent you believe will be resistant to the idea at first. You’ll want to have some clear thoughts ready to articulate about your perspective and how your concern for your parent is driving this conversation.

Moreover, taking time to think about what you’ll say ahead of time will allow you to think through how your parent will respond. There are many false and negative perceptions out there about senior living communities. You’ll probably be able to accurately guess what their biggest concerns about the move will be.

Thinking through these and knowing how to address them will allow you to keep the conversation moving forward. (Although it’s important to not shoot down your parent’s concerns with courtroom-like objections.) Along this vein, seriously consider our next point:

3. Come from a place of care and compassion.


Growing older and losing your ability to take care of yourself independently is overwhelming and scary. It’s essential that you not only take the time to consider how your parent is feeling, but how you can speak to them in a way that will clearly demonstrate your love for them, your care for their well-being, and your compassion for their new situation.

A few practical ways to do this are to have the conversation in person so your tone of voice and body language are very clearly demonstrating attentiveness and concern; actively listening to your parent’s reply and responding respectfully and gently either with “I hear you saying. . . “ or asking questions; and not rushing the conversation to get the result you want. Again, it may be that you need to have this conversation several times over the course of several months or even years before your parent feels comfortable with the decision to move.

4. Walk alongside them in the journey.


Think through ways you can actively work with your parent in this decision instead of trying to pull them along to your point of view. Make sure that as you begin the conversation, you reassure them that you want to work alongside them, not control their decision.

For example, you could brainstorm a list of questions you’d want to ask different senior living communities and the people living and working there together. Then, you could go together to visit several different communities, and have thoughtful conversations after each visit about what your parent did and did not like.


As your parent ages and finds living alone increasingly difficult, it may be that you don’t need to bring up the topic at all. Instead, you may find a very easy opening as you’re just going about your normal conversations with your parents.

For example, if they mention not seeing friends very often, you could ask them if they feel lonely. From there, it would be a simple thing to discuss how important it is for seniors to be in regular community for their overall well-being, and then to ask if they’ve ever considered a senior living community, where the friendships are easy to develop.

Or, if your parent mentions feeling nervous about driving or having difficulty finding transportation to various appointments, you could mention what you know about senior living communities—that they have on-site medical and beauty facilities, and regular transportation to a variety of places throughout the city. You could ask your parent if this ease of access is something that would appeal to them.

The important thing is that you are regularly talking with your parents so you know what’s going on in their lives and how they’re doing mentally, physically, emotionally, relationally, and spiritually. As you talk to them, you’ll most likely find plenty of ways you can bring up senior living communities naturally.

At the end of the day, you’ll be glad you’ve had this conversation with your parents.

Even though there is an unfair stigma around senior living communities that make many seniors feel that they’re losing the last of their dignity and independence when they move into a community, most say that once they’ve moved, they actually find a new sense of purpose, independence, ability to engage in entertaining activities alongside a vibrant friend group, and—perhaps most importantly—their relationships with their children improves.

If you and your parent have started the conversation, give us a call to schedule a tour today. Our experts are on hand to answer your questions (and even give you a few things to think about that you may have missed). We’d love to help you and your parent begin the journey together.

We use cookies on our website to give you the most relevant experience by remembering your preferences and repeat visits. By clicking “Accept”, you consent to the use of ALL the cookies.
Do not sell my personal information.
Cookie SettingsAccept
Manage consent

This website uses cookies to improve your experience while you navigate through the website. Out of these, the cookies that are categorized as necessary are stored on your browser as they are essential for the working of basic functionalities of the website. We also use third-party cookies that help us analyze and understand how you use this website. These cookies will be stored in your browser only with your consent. You also have the option to opt-out of these cookies. But opting out of some of these cookies may affect your browsing experience.
Necessary Always Enabled
Necessary cookies are absolutely essential for the website to function properly. These cookies ensure basic functionalities and security features of the website, anonymously.
Functional
Functional cookies help to perform certain functionalities like sharing the content of the website on social media platforms, collect feedbacks, and other third-party features.
Performance
Performance cookies are used to understand and analyze the key performance indexes of the website which helps in delivering a better user experience for the visitors.
Analytics
Analytical cookies are used to understand how visitors interact with the website. These cookies help provide information on metrics the number of visitors, bounce rate, traffic source, etc.
Advertisement
Advertisement cookies are used to provide visitors with relevant ads and marketing campaigns. These cookies track visitors across websites and collect information to provide customized ads.
Others
Other uncategorized cookies are those that are being analyzed and have not been classified into a category as yet.
SAVE & ACCEPT